(Campaign Setting) The lands of Plouton

After suffering a bad case of DM burnout several years back I am finally getting back into dm'ing bit by bit. At the time I had planned to begin using ACKS for my game. Sadly that never happened, but it has stuck in my craw that I never used this system. The time has come now to take a stab at it again. Hopefully with a new campaign setting that I am going to develope. Help is always welcome and that is why I have come back to this very forum.

I made several goals for this campaign which are as follows.

1. Classic fantasy with a twist: In other words it has to be recognisable for all people but with a distinct flavour of its own.

2. A new frontier: A new world and or wildlands to explore. Possibly for some western marches style play should it come to that.

3. Local but detailed: Keep the whole thing local and small scale at the start. Give the players something to fall in love with and want to be part of and defend.

4. Miniatures terrain and maps: If you keep things small scale and local you have the opportunity to have a miniature for everything. Not to mention scenery....

These are the things I came up with to implement in this campaign. So I set about gaining some inspiration. Random reading and looking around only drowned me in the amount of stuff available. I toyed with the idea of adapting Thunder Rift from basic D&D but decided against it. Although good, it just didn't feel right for some reason. After that was a month of trying to make hex maps to come up with something good. Again nothing clicked. The breakthrough came with something unexpected. I was browsing random pages on wiki one night and came upon the page about Pluto. The bare bones of this campaign flowed from there.

Pluto has slightly more square miles of surface area then Russia. That is more then enough creative space to work with into infinity as far as I am concerned. There are amazing maps of Pluto these days and I stumbled upon this one. 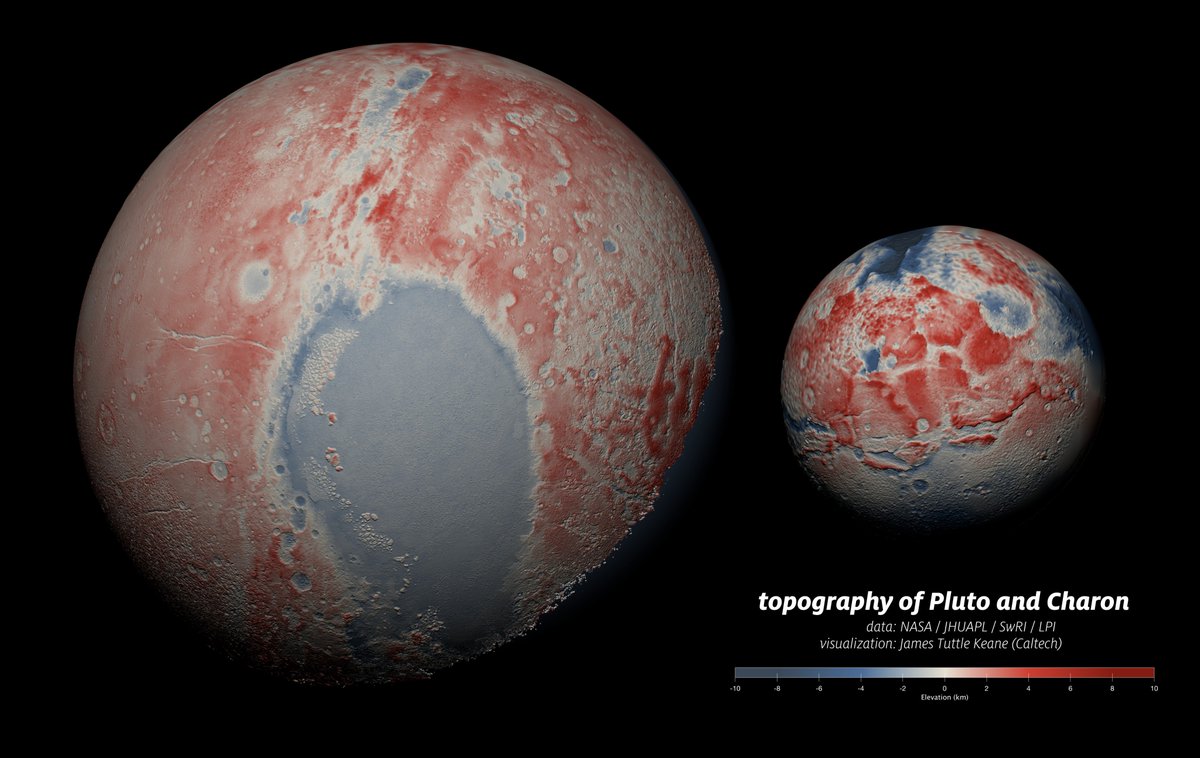 This picture once again made my creative juices flow. Not only did I have a reference for any hex map I would make but also the color scheme of the planet. Tropical blue seas, red leaf trees and silver, grey blue shrub plants/grasses. Instant alien but not too alien enviroment. Pluto kind of looks like a planet from that old Spore game in this picture.

How was I going to fill this new world with interesting things for the players to explore? Again, something different but not too different. This time it was a passage from a forgotten realms book that gave me the inspiration I needed. In the AD&D 1e book 'The savage frontier' there is a passage writing about the earlyest civilizations in the north. Namely the lizardmen, Bullywugs and Aarakocra. Cities of glass and stone along warm seas, genocidal wars and powerfull raw magic. Fallen into barbarism becouse of climate change. This is the population of this world. Thjrow in some monsters from the deep dark earth and the forests and this enviroment is going to be interesting and deadly. The mini's....are going to be a bit more difficult to get but it should be possible.

Now, who are going to be the explorers/settlers of this planet? Again, it was Pluto who gave me that well of inspiration that keeps on giving. Pluto is named after the roman god of the underworld. In greek known as Plouton. So it was going to be a semi roman kind of culture that was going to be the 'base cuture' of the explorers. Late antiquity is my go to time for the romans becouse the crossroads of antiquity and medieval just suite D&D so well. I have some beutiful miniatures from SAGA that will fit this quite nicely. This empire is in trouble and is slowly declining. I will deliberately keep this empire VERY vague becouse I want players to play in the little sandbox I am making for them. The Empire and world with no name is just there as a vehicle to give them any backstory they want. The religion that will come over with the settlers will naturally be a cult of Pluto and possibly a god one of the players takes with him.

How are they going to get to this planet? Of course I am never going to tell the players that this is another planet. They can find that out for themselves! A stone teleportation circle will bring them to this world. Who knows they may find other portals.... I may be even gonzo enough to put in things like pacal's spaceship. It does seem like the theme would fit. I am starting of this campaign in a slightly unusual way. The players will be the followers of the Dux that is currently building his stronghold (roman fort) and I will be using the full ACKS rules for the development of his realm. In the future, if all goes well, they will be lords of this new land as well.

This is a bit long but I hope you enjoy it. I will be posting more as I write it. Sometimes my mind takes me to places as you can read above. Any ideas and critique is very welcome.

Cool! I'll be interested to see what you come up with.

And remember that Pluto is also Lovecraft's Yuggoth... So insectoid fungi and/or tentacled monsters are a possibility.

This sounds like an awesome campaign! I love how you've combined Late Antiquity with Planetary Romance/Sword & Planet tropes.

If you don't already own it, I HIGHLY recommend you pick up a copy of Omer Golan's BARBARIAN CONQUERORS OF KANAHU, which will have lots of material that you'll find helpful for your new game.