General ACKS Forums General Discussion
omer June 15, 2018, 5:44pm #1
I now am itching to run, at some point in the future, a "domain inheritance" game in ACKS. The PCs would be heirs to a haunted coastal castle and a dilapidated hamlet (Market VI, I'd say in ACKS terms). In its shadow there would be several lairs/mini-dungeons in the same 6-mile hex. There would be a "Kilodungeon" including the castle and several levels beneath it, probably culminating in a Lovecraftian monstrosity (Aboleth?) beneath sea level, not to mention nasty neighbors such as bandits. Could be a wonderful campaign. A mini-setting - so much to do in one hex and the neighboring hexes!

This will probably be an old Marquise's keep, now fallen to disrepair and haunted. PCs will end up with a potential high-value stronghold, which will need clearing of horrors - and expensive repairs.

My inclination is towards a combination of "Gothic" and Lovecraftian bestiary for that mini-campaign. No goblins, but possibly toad-men or fish-men, and a good amount of undead. And bandits, of course.

Potentially a vampire, but the problem with a vampire is that vampires are villains who tend to dominate a campaign, as in Ravenloft/Curse of Strahd, and I want to keep that role for the Aboleth (?).

My general idea is that in the distant past, the (now ruined) castle was home to a Chaos-worshiping Marquessa inspired by Elizabeth Báthory. After she was slain - by one of her intended victims, no less (now canonized as St. Lena of the Dagger) - her heirs continued the Chaotic tradition, albeit in other ways than bathing in the blood of virgins.

The PCs' ancestor conquered this keep, but eventually these ancestors also succumbed to Chaos worship, seeing the local Aboleth (?) as a "God".
Successful PCs will quickly get knighted by the local ruler who would be glad to have them deal with bandits (and worse) than requiring his limited military forces do so.
Of course, the Marquessa would have risen as a Ghast for the very least, it not a Vampire, in the crypts below. Now she has worshipers among the bandits and villagers, like the Aboleth has.

Sounds great and definately something I would play or even run!. Clear the dungeon because it's yours. I thought about doing that with castle Ravenloft the original I6 module. Instead of making barovia a separate plane like it became later. The castle and the lands will belong to one or all of the players. If they defeat strahd it's theirs as well as all the lands of Barovia.

Ravenloft was indeed an inspiration, as were the Darkest Dungeon computer game and the 5E variant on Ravenloft, Curse of Strahd.

You could use the Vampire still as you would like however make it an enslaved minion of the Aboleth instead, afterall it would need a competent minion on the surface.  So while it may seem the Vampire is the big bad, it would not be the case.

I would probably make her a vampiric Rusalka - a murderous undead "mermaid", of course under the Aboleth's sway. She would swim in a large bloody pool deep within the dungeon and have sea shoul minions beringing her sacrifices.

I would probably make her a vampiric Rusalka - a murderous undead "mermaid", of course under the Aboleth's sway. She would swim in a large bloody pool deep within the dungeon and have sea shoul minions beringing her sacrifices.

I'm curious about that Dagger of Lena you mentioned. What does it do in the hands of a thief? Does it increase that thief's backstab damage multiplier against undead?

In the hands of a non-thief - probably Backstab x2 vs. undead.

In the hands of a thief - increases the Backstab multiplier by 1 vs. undead, e.g. from x2 to x3.

Ah, that's a relief. For some reason it always bugs me when items to do with backstabbing don't stack with a thief's existing backstabbing ability.

The smaller hexes are 1-mile wide, the big hex is 6-mile wide. 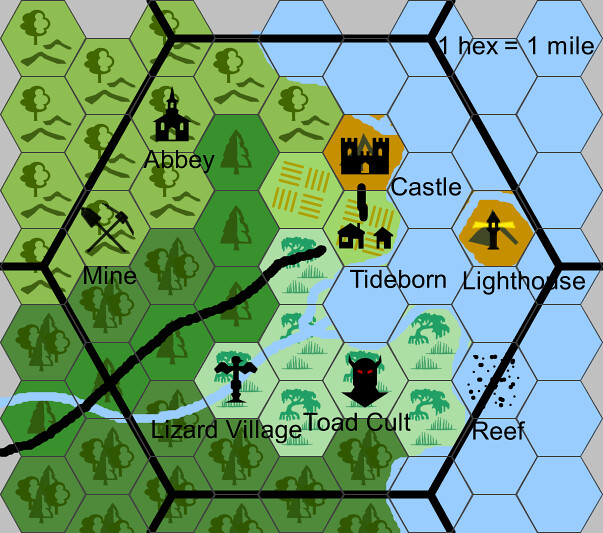