The Solisians called it Ceresil "The Grain Island". Our ancestors called it Brydain "The People's Land". We call it Lloedain "The Lost Land", and lost it is.

Three hundred years ago, our ancestors were taught the way of the one true faith. We felled the woods that led to darkness upon Brydain and brought them into light. We worshipped Solis and his son Mithradates (Father Shine Upon Him) and beat back the fickle Picts to their cold and inhospitable homeland where they preyed on each other instead of us.

Two hundred years ago, the Solisian Empire fractured as civil war gripped it and heathens, ever waiting at the edges, road in. Brydain was told to look to her own defence and she did, defending against the northern reavers, the western Cymgwrs and the endless tide of Picts that flowed forth.

One hundred years ago, Brydain lost that fight and became Lloedain, the Lost Land. Her kingdoms fell one by one until now only Kernow at Land's End remains.

We fled to Aulica and became Lloewer "The Lost Folk". A people without a home, a diaspora amongst our distant brothers on the mainland where we are protected from the predations of the Picts and their foul magic.

But soon we shall return. Soon we shall rebuild the Brydain of old on that black and fallen island and bring it back into the light.

You are an adventurer and you have heard of the great treasures of Dunasil "The Black Isle", what some called Brydain and what some call Lloedain still. Gold amongst the abandoned towns of those who lived there, treasures hidden in the ancient and abandoned Solisian ruins and mysterious things long buried from ages older still.

And now a call from the Holy City has came, a call to take back the lands from pagans and heathens. This is a chance for you to gain fame, fortune and a high place in the heavens themselves.

Session 1 - A King and a Barrow Deep 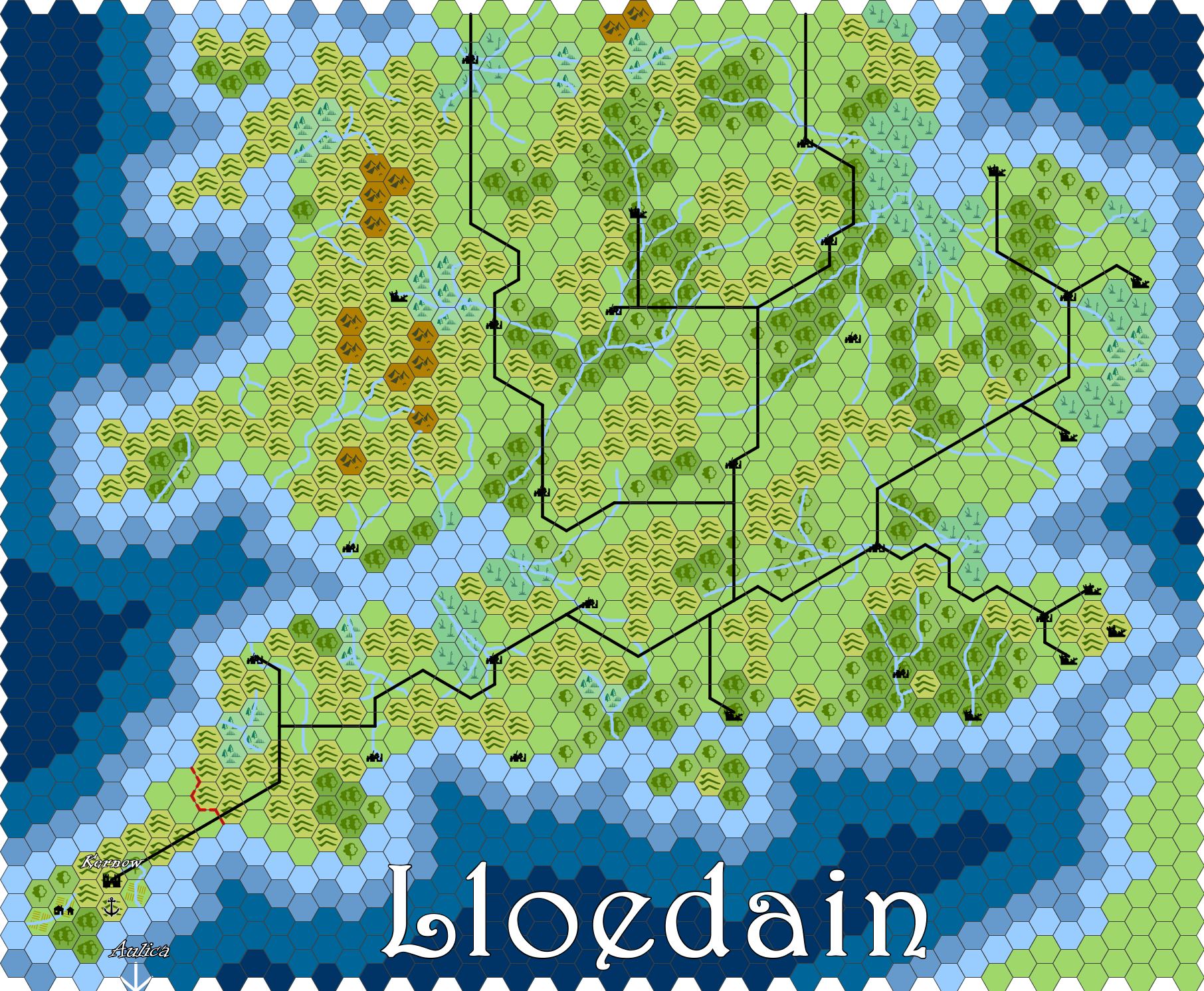 Character Appearance
A steady, stalwart figure, Urger sports a polished set of plate mail to protect him as he leads his army into battle. Utger's unremarkable looks somehow come alive once he is on the battlefield issuing orders.

Character History
The last Patriarch of the Sordragon clan, Utger carries with him the legacy of a royal family, shattered. Uprooted from their ancestral home in eastern Lloedain, the Sordragons had ruled over a grand kingdom until they lost and eventually capitulated to the Solisian Empire. The family loyally participated in the "Solisian Republic" until the Leviathan eventually collapsed under its own weight. Left exposed and destabilized, the Lloewer had no defense for the Pictish fanatics that came south and ravaged the land. The remaining Sordragons fled south across the channel and did their best to maintain some wealth as they passed among Corinthian townships, but the foreign statesmen were not well received as the effects of The Fall of the Empire were being felt across all lands. The clan's wealth and station dwindled until finally Utger has seen the writing on the wall. His family will wither and die if he does not take action.

Utger was born a flame, determined not to be put out. He grew fierce in the training ring and studied Solisian Military Strategy as well as the Sordragon Martial Accounts from his clan's chronicles. Utger spent his life preparing to retake his homeland and reclaim his rightful place on his family's throne, and so he now sets out to muster forces and retake the island through his mastery of Warcraft.

Character Appearance:
He is a average height person (5.4 feet tall to be exact), with short, dark brown hair, with a slight curl to them. At the same time he has a finely trimmed moustache, which has a tiny hint of blond in it. With his weakened blue eyes and a short nose poking out of his plump face, it is clear that this monk is not of the kind that works in the field, but rather spents his time studing old and dusty tomes.

Character History:
Hermigarius was born to a family of poor nobles turned merchants, in the capital city of kingdom of Ouresia, as the third child of Felicius Lugecianus. He is the youngest of his kinsfolk, with his brother,Rodrius, being 3 years older and studing to take over family's business one day and their older by 6 and 3 years sister Teresa being married to the current head of another, smaller family of merchants. Hermigarius's childhood was quite happy and though he wasn't a rebellious child, his father decided to sent him to local monastery of the Order of Saint Liguric to avoid future rivalry between him and Rodrius. There, brother Hermi, as he is often called, studied many books, often ones retrieved from journeys which descriptions were too fantastical to be true, and they, together with legends he read of far-away land of Lloedain, formed his passion for story telling and high adventure. But he was never, for all of his 20 years in the Order, assigned a mission in the field, so to speak. Some say it was due to his average strength, some say his father worried too much and was secretly negotiating such a calm life for his son with high-ranking officials of the Order. Whatever the case, now that the Order is seeking to retrieve old tomes from the ruins of Lloedain, his knowledge of that land (and more importantly, Corinthian language) makes him best suited for this job.

Character History:
? ((Player joined ten minutes before the session and has yet to write this out.))

Session 1 - A King and a Barrow Deep

The session started with the players on a boat from Aulica to Lloedain, a journey of two days. In that short space of time, Utger, Hermigarius and Thrywan became acquianted and decided that their talents matched up quite well for the exploration of Lloedain (which Utger believes it is his destiny to rule and views it less as "exploration" and more "pre-emptive king's rounds").

Once at the docks at Kernow, they were greeted by the local steward who informed them that the king (who would barely be considered a baron upon the mainland) had a task for them if they would follow him. He provided fresh horses and so the journey only took around two hours. When they travelled through the village outside the castle, they noticed that the people looked half-starved and it was more of an extended slum than a true village. The same could be said of the build up of houses inside the castle.

Finally, they reached the keep itself, where a large, joyous and rotund man waited upon a throne for them. He announced himself as King Guotodin. He informs the adventurers that there is an infestation of redcaps (knee high man-shaped creatures with red bulbous hat-like mushrooms on their heads) out to the east but that isn't the problem. The problem is that Picts have been seen out that way and he wants them to go to the nearby barrowmound to make sure it hasn't been disturbed.

The King orders the adventurers to be served well and a huge table is dragged out and laden with food, which the group immediately ignores to go hunting through town to find spearcatchers hirelings to assist them. Utger comes across a group of four men and manages to hire three of them to join him with the coin left in his purse.

Once the group returns to the throne room, they find King Guotodin asleep and drooling and the steward watches angrily as the group and their hirelings proceeds to devour and / or hide away most of the food upon the table.

They are woken in the morning by the steward with food, who tells them that there is a farmer waiting to guide them to the mound. The group's two days of travel passes uneventfully and they see the barrowmound in the distance. The farmer asks for payment but the group, newly poor, has nothing to offer but rations which the farmer spits at them for before storming off back towards Kernow. (Utger sighs, hoping that wont come back to...bite them)

They discover that the rock in front of the barrow has been moved and the way in, whilst dark, is open. They proceed into the chamber beyond and discover a hallway with five exits, four of which lead to chambers with clay sculptures of corpses. One of the sculptures has a silver ring on a finger which Thrywan breaks off, crumbling the sculpture and releasing a blast of toxic gas. (Hermigarius Lugecianus: "That's unpleasant...") Luckily, due to his years of experience in dirty situations, he resists the poisonous fumes.

The group discovers a gold amulet in the remains of the sculpture but resist the adventuring urge to go smash the rest of them.

They proceed to the end of the hallway where there is a stone door with holes in for handles. After a bit of searching, Thrywan discovers that the door is linked to a trap overhead, seemingly when it is opened. He does not, however, manage to disarm the trap, leading to other methods.

Utger and one of his hirelings take a side of the door each, pressing a hand into a gap and slamming themselves against the wall. A huge stone hammer comes flying from the ceiling and smashes the door into pieces, opening the way beyond.

The next room is a larger chamber with three skeletons (one in a gold crown, the other two with silver amulets around their necks) stood up in alcoves in the wall across from them.

Hermigarius starts chanting benedictions, praying for the sun to protect them from evil in this dark and forbidden abode. Utger approaches the skeletons and, once he gets close enough, all three of them tremble to life. Hermigarius' benedictions fail, as his ceremony or his faith wavers. Utger and Hermigarius are both flat footed but the hirelings Utger hired in town come in to save the day, striking down two of the skeletons.

In the battle, one of the hirelings got hit hard and fell to the ground. As they check his wounds, they discover that the skeleton who hit him managed to smash his face into a pulpy mess, leaving him unable to do anything except burble through blood. As Hermigarius tries to rally his spirit, Utger gives him a warrior's farewell with a sword into his heart.

And that is where the session ended! It was a short one due to the players being new to the system, me getting back to being used to the system and the like. The hireling, unfortunately, rolled a 1 on his HP roll and was hit for a total of 6 damage. Unfortunate for him for sure but that's what spearcatchers hirelings are for!