For my current ACKS campaign, I recently designed an encounter system. I thought I’d share.

What I’ve attempted here is to set up an entire day’s worth of travel, encounters, events and adventure in a single roll.

By rolling 3D6, the DM can determine the weather for that day, see if the party get’s lost, check for encounters, obstacles and delays. Even better, you’ll know where and when these events happen.

(I made some example images to help you understand what I’m talking about. I’ve linked them in teh post below, as inline images are not supported?)

Assumptions
First off, some assumptions. The most important of which is, that a full days travel takes characters about three hexes far on my campaign map. That’s roughly 18 miles, which should be quite a walk for anybody. The number three is important, for reasons that will become clear shortly.

Secondly, I’m assuming you already have encounter tables for the wilderness the PC’s will be traveling. This system will show you if there’s an encounter, but not what it is.

Thirdly, the system uses three D6. One red, one blue, one green. While any colour dice will work fine, these colours help you more easily remember what each die stands for.

On to the system!

Step one: Rolling the dice.
The system uses 3 dice. Red, blue and green. The Blue die is the Weather die; the Green die is the Travel die; and the Red die is the Trouble die. Simply roll the dice, nothing crazy here.

Step two: Ordering the dice.
The dice may end up in a line or a clump, but however they fall, we will try to determine their order. Find the leftmost die. From there move clockwise to determine the order. In the example below, you can see how this works.

(If going clockwise feels odd, feel free to devise your own system. It’s not that critical.)

Comparing the rolls to the chance of encounter per hex, you can determine quickly if the party will have an encounter, and where.

I still have to roll to determine what the actual encounter is, but knowing that -say- Giant Centipedes will be encountered in the third hex could allow me to foreshadow it more in the travel to the third hex.

Step four: the Weather Die.
The Blue die indicates the change in weather for this day. The weather track below is used to roughly indicate how warm, wet or windy the day will be. By using three markers that shift left and right, we can create changing weather patterns that tend towards the neutral, and will not change from snow to blistering heat in a day. The markers start of in any position you like, but for this example we’ll start them in the neutral centre. (Note that from there they do not automatically return to the centre)

The crooked arrow in the track means ‘check right’.
That is, check the value of the die to the right of the Blue die. (Obviously, if the Blue die is the rightmost one, you check the leftmost die).

If that die reads 1,2 or 3, move the markers right. If 4,5 or 6, move the markers left. If the blue die is a 6, pick a single marker and move it 6 steps. This way, you can still have sudden dry spells, or freak storms. If the marker hits the grey-purple blocks in the far ends, extreme weather is called for.

Example: The Blue roll is a 5 and the die to the right (Red) is a two, so I move the heat marker three steps to the right, and the wind marker two steps (for a total of five). It will be a pleasantly warm day with a bit of wind.

The position of the Blue die tells you where in the day (on which hex) the weather will be most present. In this case, it may mean the day starts off (first hex) cold and foggy, and in the second hex it’ll clear up into a fine, pleasant day. In other cases, you’ll know the hex where the thunderstorm will strike, or where the day turns cold.

If the die comes up 2 or higher in easy terrain, 3 or higher in normal terrain or 4 or higher in difficult terrain, the party finds its way. Explorers or characters with appropriate proficiencies add +1 to the roll (making it impossible for explorers to get lost in an open plain - very good). 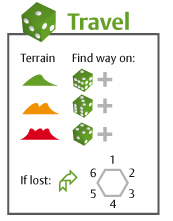 If the party loses their way, check right. The die to the right will tell you which way the party strays. The position of the Green die tells you where in their travels the party gets lost. Getting lost early on may mean straying farther of course.

Example: The Kossian Bogs can be treacherous. Despite the nice weather, all the dead trees and soggy hills begin to look alike. Early on in the day, the party travels too far south west. If they don't notice in time, they may end up near the barrowmounds at nightfall - not a safe place to have to camp!

Step six: the Trouble Die.
The trouble die adds a little spice to the mix. It may introduce extra danger, much needed help or a possible extra encounter.
The Red die is only used when doubles are rolled. Depending on the Trouble Track, it will produce helpful or dangerous situations.

Remember, if there are no doubles, do nothing. There will be no extra trouble or help this day. If all three dice come up the same, you may want to insert something special. I plan on letting the characters encounter a wondrous place whenever this happens.

After moving the marker, look up the die roll of the Red die on the chart to the right. Depending on wether the marker is in the positive or negative half of the Trouble Track, and depending on how far along it is, decide what happens. Some examples of what the chart could mean follow below. Remember, the position of the red die tells you in which hex the troubles start.

1. Dynamic Lair: The party encounters a dynamic lair. Note that a roll of 1 on the red die also means there’s an encounter in this hex - it will be with the occupants of the lair. A positive effect means that the party can spot the lair (and it’s inhabitants) from far away. A negative effect means blundering into an owlbear’s den. Ouch.

2. Building: A building or ruin of some sort can be found in this hex. Positive results may mean good shelter, possibly inhabited. Negative results may mean ruined walls and whistling winds, a dangerously crumbling structure, or - extremely negative - a fortified building with alert enemies inside.

3. Obstacle: A fallen log across the road, a group of bandits, traps, a bridge washed away… there are many things that can hinder the traveller. Positive results may mean blundering into a little used path, finding a toppled roadmarker or maybe even a trap that can be turned against pursuers.

4. Meeting: Positive meeting include travelling caravans, merchants, a troupe of soldiers heading the right way or spotting an enemy patrol without them noticing. Negative meetings are being spotted by that patrol, blundering into a feasting Giant, travellers with dishonest intentions and finding a haunted glade where the sould of a dead legion fight for all eternity. Note that this result isn’t meant to be an encounter (unless the 4 on the Red die is enought to create an encounter, of course). It may be more of a puzzle or negotiation challenge.

5 / 6: Delays: The journey is delayed or sped up 1 - 3 hours. If the Weather die indicates bad weather, perhaps a bridge got washed away. Or maybe the party found a crossing that was made possible by the water level dropping due to the warm weather. Other ideas are a potentially dangerous situation that needs to be avoided, herd animals blocking the path, a favourable wind…

Example: The Trouble die comes up 2 and is part of the double roll. Moving the marker two steps, we see the problem is annoying. Tomorrows' roll may shift the marker even further towards Malevolent, or might shift it back towards neutral). Since the Red die is the last one, the party chances upon a broken down tower in the swamp. It's sagging and in bad repair, but the only dry camping site nearby. Upon entering the tower, however, it tuns out to be infested with thousands upon thousands of centipedes. To make matters worse, three Giant Centipedes crwal among the disgusting horde… If the PC's defeat the monsters, they still have to clear out the tower with fire, or risk sleeping among crawling nasties. Yich.

Combining all this, we get a day’s worth of events and adventure in a single roll. All too often, I forget about the weather, the sounds and smells of travel, and I hope this system will help me make travel a bit more interesting. 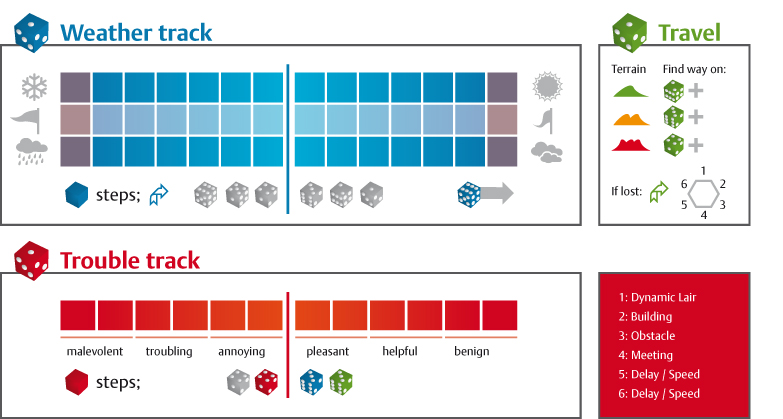 A lot to take in, but in practice reading the roll is dead simple. What does everybody think? How can I improve this? Did I skew the odds somewhere?

I’d love to hear your opinions.

True, it does somewhat increase the chances of encountering a lair.

However, in this system, you only encounter a lair when there are doubles in the roll, AND if the Red die rolls a 1. In which case you would have encountered something anyway. So I don’t think it increases the chance of encounters per sé.

I agree that it’s probably best to not also seperately roll for lairs during ‘normal’ encounters.

Oh wait. I’m slow on the uptake. You mean that lairs usually have more monsters than wandering encounters? Didn’t think of that. Perhaps I can lessen that threat somehow…

Thanks for the feedback! This is very much a work in progress. If I can improve it somehow, I will.

It looks like 2/3rds of the time trouble is negative, 1/3rd positive?

It is called the “Trouble” die, so that makes sense to me.

I like this. My players are still in the process of gaining experience before doing some full blown exploring, so I’ll certainly give this a try.

I’m fine with there being more trouble than help, but Tom Hudson’s post did make me realise something: The Trouble Track would over time always end up left. After all, there’s a 2 in 3 chance of it going left, and only a 1 in 3 chance of it coming back to the right…

I propose changing the system so that the Trouble Track resets to one step positive of the middle whenever there’s NO doubles. Does that sound good?